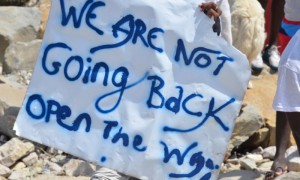 at the seat of Associazione Cross Point, Via Battaglie 33/a Brescia

HOW DOES ASYLUM REQUEST WORK?

WHAT ARE THE RIGHTS OF ASYLUM SEEKERS AND REFUGEES IN EUROPE AND ITALY?

WHAT ARE THE PROSPECTS OF TODAY AND WHAT IS CHANGING?

LET’S MEET TO TALK TOGETHER ABOUT IT!

In these days we hear a lot talking about asylum seekers and refugees on newspapers and television, those two terms are used as synonims but they actually describe two legal situations which are really different between each other.

More and more we hear words like “invasion” and “emergency”. Everyday new numbers about the arrival of people trenspassing the borders of Fortess Europe are diffused, people running away from wars, persecutions and poverty who are calling into question the politics of European Union.

The debate about welcoming is always stronger and some groups and political parties are taking the opportunity to influence the public opinion to gain consensus by stoking the polemic and diffusing fear and insecurity feelings. This atmosphere is intensifying racist behaviors, which are already present in the institutions, originating new discriminations.

A clear example is the distinction between economic migrants and refugees which is established as a juridical criterion to choose who can legally reside in Europe and who is forced to expulsion, even if this is just an arbitrary distinction.

The percentage of people receiving the international protection from territory commissions is decreasing every year making always further the possibility of obtaining a permit of staying for these people.

For these reasons we think it’s important to open a discussion to inform and to make light on all the aspects regarding this issue.

For English and French speakers translation service available during the meeting